Pretty In Pink -- Grieve Out Loud 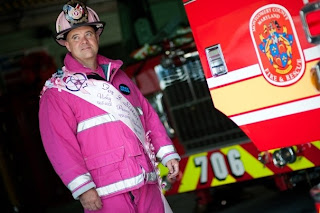 
I read this timely story in The Washington Post yesterday about a local fireman, Marshall Moneymaker, who had lost his three older sisters to breast cancer in less than two years.  Moneymaker and his wife did all they could to help the three sisters beat this awful disease but it wasn't enough.  After burying three sisters, the enormity of what had happened left Moneymaker emotionally exhausted.

Where do you go when you have felt pain and loss deeper than you ever thought possible?

You can shut down and put out the "Vacant" sign or you can stay involved in life and fight back.  And that is exactly what Moneymaker did.

A month after he had buried the third sister, some volunteers for the Susan G. Komen 3-day Walk for the Cure were coincidentally setting up a pitt stop near his firehouse in Bethesda, MD.  One thing led to another and he and the other volunteers started talking about breast cancer and how it had dramatically touched their lives.  One of the volunteers Moneymaker met was Mollie Simpkins.  Simpkins said she felt a bond with Moneymaker and she liked his generous spirit.

"After you lose someone to cancer, you're not sure if you're grieving or honoring the dead properly," Simpkins said.  "Everybody has their own way.  There are those that grieve in silence, and then there's us."

Moneymaker's actions in the face of personal tragedy are incredibly heroic and show us that freedom comes from not being afraid to grieve out loud.

Check out the picture of Moneymaker above decked out in pink as a tribute to his sisters.  That's my idea of a real man!
Posted by Cry, Laugh, Heal at 8:31 PM

Cry, Laugh, Heal
Hi! My name is Mary Kate. My blog is about working your way through grief by staying healthy, strengthening your support system and being resilient.

I am a widow, mother, former journalist and dancer. I miss my husband but I am embracing my journey wherever it takes me.